The longest bicycle path in the world 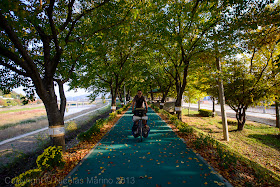 Korea seems fully aware of the problems that come with such an excess of technology and a population of workaholics. To try to compensate for these new "bad habits", the result of a mega-project of engineering that involved reconfiguring the course of the four major rivers of the country, included with it the design of several bike paths that connect the whole country from north to south from east to west. In this way, they are not only making exhaustive use of hydroelectric power but also giving people an incentive to go cycling and stay outdoors, providing them with the necessary space to do it in a safe, comfortable and professional way.
Aside from the main "four rivers bike path" that links Incheon with Busan along 700 km, the number of new bike-path is increasing year by year, connecting different regions and cities.
Many are currently under construction and the final goal is to connect the whole country through a network of bike paths, allowing cyclists to move freely, staying away from the dangers of motorized traffic. This not only solves the stress of the cyclists but also that one of the drivers, increasing overall safety significantly. As if it weren't enough, the government made sure to design the path in a way that would connect the major tourist attractions of the country. Quite an advanced way of thinking. 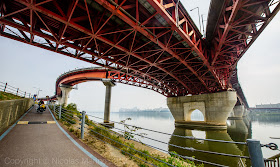 Cycling along the bike-path, even if there is no adventure of any kind, is a real pleasure. It is place that has been evidently designed for us. It isn't just an asphalted strip, it is a fully marked road, with all the standard signs and signals. It includes all of the facilities and amenities that a cyclist might need any time along the way and all of them are originally designed. 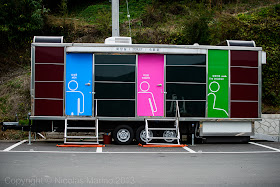 Toilets and showers are found very often. There are also information centers that provide fully detailed maps for free (as if getting lost was ever possible!). The whole landscape and urban space of it have been beautifully designed. Some stretches even include speakers playing classical music.  There are service stations including automatic pumps and tools for fixing punctures. They seem to have thought of every single detail, there are even short curbs to place your feet so you don't have to get off the saddle when you stop for a rest. 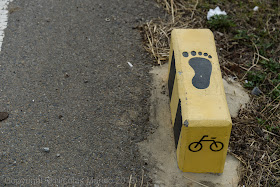 South Korea is a 100% mountainous country and even though the bike-path goes along the rivers most of the time, there are some places where a mountain stands in the way, but that isn't a problem either because the path has its own tunnels and bridges. 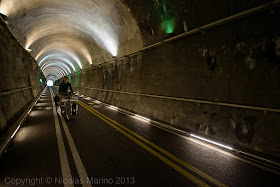 This mega-engineering project also gave way to dozens of dams that control the flow of the rivers. You can find them all along the way and it is because of this very reason that Koreans haven't overlooked their visual impact and made of these colossal works of engineering, magnificent works of architecture. They are all different and they are all equally well-designed. 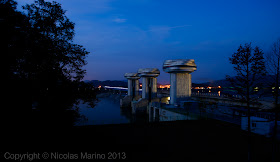 The dams most of the time serve as bridges for the bike-path that allow you to go from one side to other of the river. The whole experience of riding across them is visually attractive. At night, the lights are turned on and the dams are exquisitely illuminated as if they were emblematic buildings. 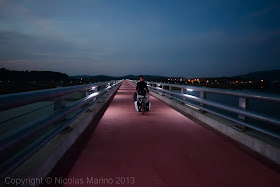 Very little of the rural world is left that has not been industrialized yet. The vast majority of the little flat space available for planting is used to build big greenhouses. Cows also find their home in huge sheds opened on the sides. In them, they have big fans and speakers playing classical music. Yes, it is not a joke. There's the idea here (and in Japan as well) that the meat is healthier if the animal doesn't suffer from stress. Peasants perform all tasks using cutting edge technology. My eyes could hardly believe it when watching a tractor wrapping in plastic bales of straw completely automatically from beginning to end. 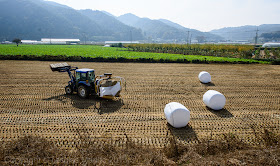 Fruit picking is also automatic and so is the process that follows. It was the peak of persimon season in October and big sheds had them hanging in long strips where they were left to ripe and dry. 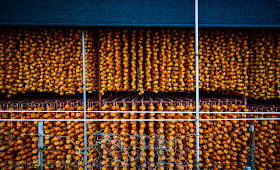 There is some manual labor left, but not even in this case, peasants seem to have to endure, not even a portion of what their colleagues in the third world have to go through. Even when manual labor is necessary it is undertaken in a tidy and sophisticated way. 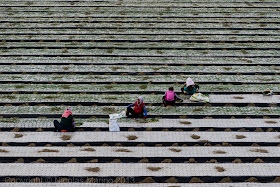 But farming isn't South Korea's main strength. Arable land is extremely limited and even those spaces have been compressed in between the mountains and the long networks of high-speed highways that connect the whole country. 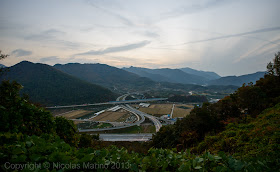 The path in itself isn't the most spectacular but the mountains are nice and we were lucky enough to have cycled there in autumn when were able to enjoy the splendid array of colors of the foliage all along the way. 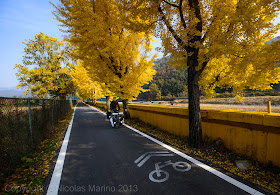 With the exception of the places where the bike-path meets the big cities, everything is generally pretty calm and quiet. There are always cyclists to be found all along the way. Some of them use the path for exercising, some to go from place to place, some just to be outdoors and some only to show their latest acquisition. The culture of cycling took off with these projects and being a wealthy society with extremely high-purchasing power, Koreans used to fly by us riding bicycles that can be lifted with the pink finger and easily are in the five figures range. All of them, of course, come with all of the accessories available in the market, including the most vital one, the Smartphone handlebar adapter, lest they spend too much time away from the Samsung Galaxy, most people seem to live in. They can cycle 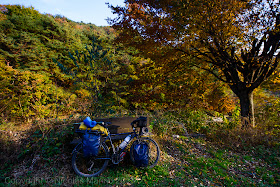 All being said, the bike-path isn't as quiet as it could be. South Korea lives in a state of permanent alert, not to say absolute paranoia, preparing to respond at any time to any eventual war against their renegade brothers from the north, led by a sadistic unpredictable megalomaniac. Not even a single day would pass by without hearing the deafening sound of  war jets flying by doing some sort of training all over the country. Military presence is omnipresent, it's everywhere, not only the local one but also the U.S one, which has its own base with up to 30.000 permanent soldiers in service and up to 70.000 other people for related services. Riding past a small town, the whole ground suddenly began to shake as though an earthquake was coming. We stopped, turned back and saw the tanks coming. 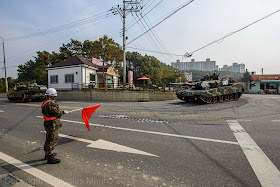 Military madness aside, perhaps one of the most interesting parts was riding across Gumi, the epicenter of cutting-edge technology of the country, to which people refer to as the Korean Silicon Valley. Gumi is the home of most South Korean electronic giants, for both commercial brands and infrastructure related stuff like fiber optics and semiconductors. LG has a lot of different factories in the area but its display factory is so big that seems to have the size of several football fields. As days went by, we slowly got unused to the encounter with motor vehicles. In a way, the bike-path is a parallel universe for cyclists. There are little to no reasons to cycle away from it. At night, it is possible to camp on any of the several outdoor spaces or sometimes, even better, finding a gazebo under which to put our floor mats and sleeping bags and sleep right there. 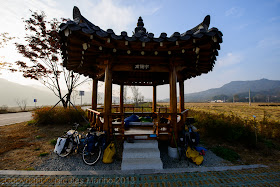 As we approached Busan, rivers become wider before reaching the ocean and the mountain slopes get closer and steeper. It isn't a problem because the bike-path becomes a floating bridge that runs separate to the slope and even on top of the river. 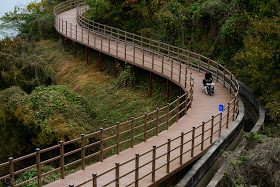 After 7 quiet and days, we finished the 650 km of bike-path that link Seoul with Busan. It's a nice and easy ride but far from extraordinary and completely devoid of adventure of any kind. Air pollution was more than I expected, the sky was generally a greyish blue, not as bad as it is in China, but far from a clear light-blue. On the other hand, from a social and technological point of view it is really interesting. It's like being in the kitchen of the cyber-future, in a country that still has some way to go to match its ultra-hyper-developed neighbor, Japan, but not much more left until that day comes. We cannot keep going further because there is no more country. All South Korea, with its population of 60 million, has the size of a little piece of land in any big country, but considering their limited space and what they have accomplished so far and what they will probably accomplish in the coming decades, it is reason enough to take our hats off. After having spent no less than 2 months in all of the countries that we visited this year, 10 days in South Korea felt like a breeze and went almost unnoticed. Once at the port in Busan, on board of a Japanese ferry we started the 10 hours of navigation to the port of Fukuoka.
Nico at Sunday, February 02, 2014
Share